The fact that the Technik Museum Sinsheim is home to some very special motorised curiosities is well known. The flagship for this is the experimental vehicle BRUTUS. A 47-litre capacity giant on a 1907 chain drive chassis. Now it's getting reinforcements in the form of a fire-breathing hell machine: Packard-Bentley "Mavis". The new exhibit is now displayed in the Technik Museum Sinsheim. 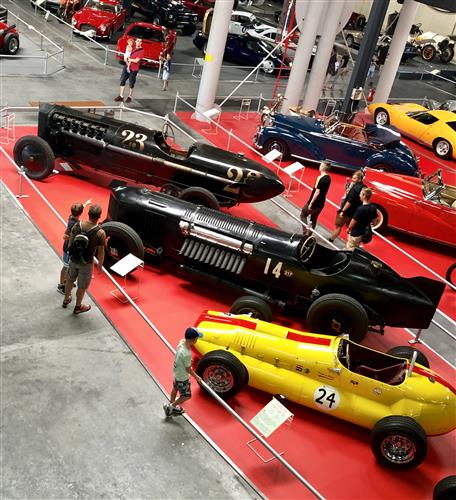 42-litre capacity, 1,500 hp and 2.4 tonnes of metal - these are the awe-inspiring key facts about the new exhibit in the Technik Museum Sinsheim. Packard-Bentley "Mavis" is neither a production vehicle nor a prototype of a well-known car manufacturer. It is the original creation of the British engineer Chris Williams, and it has been causing a lot of excitement at numerous classic car events since 2010. This homemade brand, named after the fictional female figure Mavis Riley from the TV soap opera of the 60s/70s, "Coronation Street", is anything but ladylike. The Bentley eight-litre chassis is powered by a Packard torpedo engine 4M-2500 V-12, which was used in the US Navy in World War II and later celebrated successes in the tractor-pulling event under the name "Snoopy I". True to the motto "don't do things by halves" the beast consumes 15 litres of fuel at full pelt – per minute, of course. And anyone who might be thinking that the driving pleasure that it offers is only fleeting, would be wrong. The "Mavis" houses a 200-litre fuel tank. For seven years, the Briton has worked on this 'lady', as Chris Williams calls her with a wink, and installed almost only vintage parts. "It's the biggest waste of time, money, and engineering," he admits with a laugh, and indeed, such a machine is unparalleled in the world. 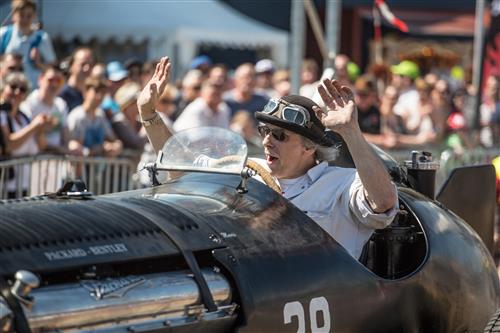 This was found in the Technik Museum Sinsheim. As a permanent loan, the unique exhibit is now next to the capacity monster BRUTUS. Once a year, on the second weekend in May, "Mavis" is allowed to play at the now legendary BRAZZELTAG (Vroom Vroom day). As soon as she starts, she begins to gasp and smoke – that's how she prepares for her performance. And this is quite something to behold. The power in her lungs can be heard from afar. As soon as the car engages, the ground shakes; from the 24 exhaust pipes she spits fire and leaves only rubble and ashes. BRAZZELTAG fans celebrate the Briton's performances with his bowler hat and his Packard Bentley "Mavis".